Capitalism is the social system based on individual rights

Capitalism is the social system based on individual rights. The term capitalism is used here in the broader philosophical, political sense (social system), and not in the narrower economic sense (market economy).

Capitalism is not just an economic system (the free-market) that can be grafted onto any political structure. Capitalism is an integrated system with specific dependencies. The economy of capitalism — the free market — depends on a specific legal (objective law), political (individual rights), and ethical (rational self-interest) foundation. It is these dependencies that make individuals free not only in their economic affairs, but in their personal affairs as well.

What is a capitalist?

The battle over capitalism is not just an argument over wealth; it is a philosophical one over the individual’s inalienable right to life, liberty, and the pursuit of their happiness.

Capitalism is the social system that leaves the individual free to be moral — free to act by reason in the pursuit of one’s self-interest (happiness).

Politically, capitalism is the social system of laissez-faire that regards the individual as a sovereign, independent being with an inalienable right to their own life.

Legally, capitalism operates under a rule of objective law (as opposed to an arbitrary rule of man) whose fundamental purpose is the protection of individual rights.

Economically, when freedom under a rule of objective law is applied to the sphere of production and trade, its result is the free-market.

Culturally, when freedom is applied to personal relationships, the arts, technology, and the sciences, it leads to human flourishing, peace, and progress.

“One of the most revolutionary and powerful works on capitalism—and on politics—that has ever been published.”—Barron’s magazine

“No politico-economic system in history has ever proved its value so eloquently or has benefited mankind so greatly as capitalism—and none has ever been attacked so savagely, viciously, and blindly. The flood of misinformation, misrepresentation, distortion, and outright falsehood about capitalism is such that the young people of today have no idea (and virtually no way of discovering any idea) of its actual nature.”

"By their silence—by their evasion of the clash between capitalism and altruism—it is capitalism's alleged champions who are responsible for the fact that capitalism is being destroyed without a hearing, without a trial, without any public knowledge of its principles, its nature, its history, or its moral meaning. It is being destroyed in the manner of a nightmare lynching—as if a blind, despair-crazed mob were burning a straw man, not knowing that the grotesquely deformed bundle of straw is hiding the living body of the ideal."

"The method of capitalism's destruction rests on never letting the world discover what it is that is being destroyed—on never allowing it to be identified within the hearing of the young."

"The purpose of this book is to Identify it."

AYN RAND (from the Introduction) 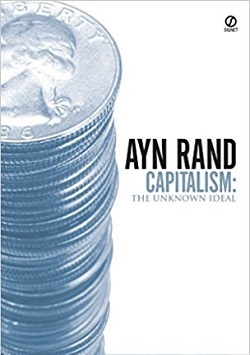 Order the book Capitalism: The Unknown Ideal by Ayn Rand

Read or listen to an excerpt: What is Capitalism? (ARI Campus)